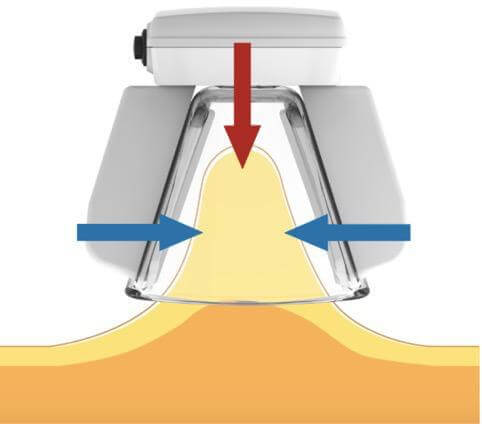 Cryolipolysis is a new technology that uses cold exposure, or energy extraction, to result in localized panniculitis and modulation of fat. Presently, the Zeltiq cryolipolysis device is FDA cleared for skin cooling, as well as various other indications, but not for lipolysis. There is, however, a pending premarket notification for non invasive fat layer reduction. Initial animal and human studies have demonstrated significant reductions in the superficial fat layer thickness, ranging from 20% to 80%, following a single cryolipolysis treatment. The decrease in fat thickness occurs gradually over the first 3 months following treatment, and is most pronounced in patients with limited, discrete fat bulges. Erythema of the skin, bruising, and temporary numbness at the treatment site are commonly observed following treatment with the device, though these effects largely resolve in approximately 1 week.

Fat treatment and removal is a worldwide, billion-dollar cosmetic industry, and liposuction remains the most common surgical cosmetic procedure performed in the United States. Although liposuction is an effective therapeutic option for the removal of fat and can be safely performed on an outpatient basis, it remains an invasive procedure. In recent years, there has been a dramatic trend toward effective, noninvasive procedures. Unfortunately, current noninvasive fat treatments such as Endermologie (LPG Systems, Valence, France), radiofrequency treatment, and lasers have resulted in only modest clinical improvements in the appearance of fat and cellulite. There is, therefore, a great demand and need for an effective, selective, and noninvasive treatment option for excess adipose tissue.

Cryolipolysis is based on clinical observations that cold exposure, under the proper circumstances, can result in localized panniculitis; this panniculitis ultimately results in the reduction and clearance of adipose tissue. Cold-induced panniculitis was initially described in infants, where it is frequently known as popsicle panniculitis. However, it has also been observed in adult patients; for example, panniculitis occurring after horseback riding in cold environments is known as equestrian panniculitis. Exogenous application of cold, particularly with aggressive cryosurgery, is known to cause epidermal damage as well as damage to the underlying adipose tissue.
Cryolipolysis attempts to use controlled fat cooling, also known as energy extraction, to cause localized panniculitis and fat reduction. By controlling and modulating the cold exposure, it could be possible to selectively damage the adipocytes, while avoiding damage to the overlying epidermis and dermis. This would result in an effective, localized, and noninvasive treatment for excess adipose tissue.

A multicenter, prospective, nonrandomized clinical study evaluating the use of cryolipolysis for fat layer reduction of the flanks (ie, love handles) and back (ie, back fat pads) was conducted at 12 sites. Patients underwent cryolipolysis treatment to 1 area，while a symmetric, contralateral area was left untreated to serve as a control for observing clinical efficacy. An interim subgroup analysis of all patients in the “love handle” group, 32 patients, was performed. Clinical efficacy was determined at 4 months post-treatment using visual assessment with digital photography, physician assessment, and subject satisfaction. Most patients had a clinical improvement with a visible contour change. A subset of 10 patients underwent pre- and post-treatment ultrasound imaging. Of these 10 patients, all had a decrease in the thickness of their fat layer, with an average reduction in thickness of 22.4%. Importantly, regardless of the assessment protocol, the best cosmetic results were achieved in those patients with a modest, discrete fat bulge. The treatment was well tolerated by patients with no adverse events related to the device or treatment.

A feasibility study of using cryolipolysis to reduce abdominal fat is currently ongoing. A total of 42 subjects were enrolled in this study. Symmetric abdominal fat bulges, typically to the left and right of the umbilicus, were treated with, cryolipolysis. An interim analysis of the subjects self-assessments indicated that 79% (31 of 39) subjects reported clinical improvement within the first 2-4 months after the procedure. Further clinical end points, including blinded physician assessments and ultrasound measurements of fat layer thickness, have not been reported as of yet. The interim analysis appears to support that cryolipolysis may be effective for noninvasive contouring of abdominal fat and body sculpting.