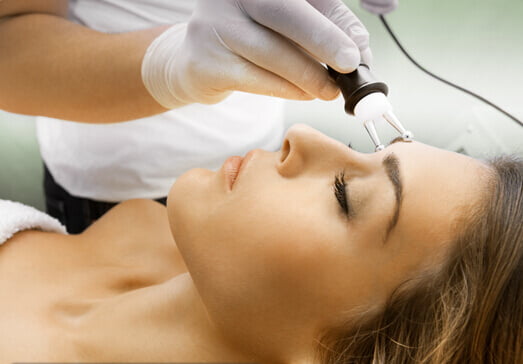 Sagging jowls are the manifestation of loss in elasticity with the resulting skin drooping, and many patients request non-invasive methods to contract or tighten the skin. These non-invasive methods include lasers, both non-ablative fractional and macro spot size, focused ultrasound, and radio frequency (RF). Use of RF is typically reserved for deeper skin heating without causing ablation of the epidermis and dermis. RF devices are within the frequency range of 3KHz to 24GHz, which comprise the so-called ISM-RF brands, which are reserved for industrial, scientific, and medical (ISM) uses. RF can be used not only to induce contraction of skin but also, in certain iterations, for reduction of fat.

By manipulating skin cooling, RF can be used for heating and reduction of fat. As the accessibility of food calories increases in Western civilization, so do the methods of reducing the effects of fat accumulation. Multiple noninvasive modalities to induce adipocyte apoptosis in pockets of fat have recently become obtainable. These modalities primarily aim at targeting the properties of fat that differentiate skin from muscle, thus resulting in the selective removal or dissolution of fat, otherwise known as lipolysis. Currently available noninvasive fat removal methods use heating, cooling, laser, RF, and ultrasound sources to more selectively target adipocytes.

The medical use of RF is based on an oscillating electrical current that forces collisions between charged molecules and ions, which are then transformed into heat. Water is the main target for this process. As a result, RF heating occurs irrespective of chromophore or skin type and is not dependent on selective photothermolysis but rather heating of water. RF-generated tissue heating has different biological and clinical effects, depending on the depth of tissue targeted, the frequency used, and the specific cooling of the dermis and epidermis. The depth of penetration of RF energy is inversely proportional to the frequency. Consequently, lower frequencies of RF are able to penetrate more deeply. RF technology also has the ability to noninvasively and selectively heat large volumes of subcutaneous adipose tissue. By selecting the appropriate electric field, one can obtain greater heating of fat or water.

RF can be delivered using the monopolar, bipolar, and unipolar devices described later in the text. The dermis is composed of collagen, elastin, and ground substances. RF mediated thermal stimulation of this matrix results in an immediate, although temporary, change in the helical structure of collagen. It is also believed that RF thermal stimulation of fibroblasts, which produces new collagen and new elastin, as well as other substances to enhance dermal structure. RF thermal stimulation of adipose tissue is believed to result in a thermal-mediated stimulation of adipocyte metabolism and augmented activity of lipase-mediated enzymatic degradation of triglycerides into free fatty acids and glycerol. Induction of apoptosis of fat cells is another proposed mechanism.

The ISM bands were first established at the International Telecommunications Conference of the International Tele- communication Union held in Atlantic City in 1947. Initial use of RF for medicine included the pinpoint coagulation of blood vessels during surgery. This was the first use of mono-polar RF, requiring the patient to have a grounding plate in contact with the skin. RF induced heat ablation has been applied to other fields of dermatology, including soft-tissue (basal cell carcinoma) ablation, endovenous ablation of the saphenous system varicosities, and the treatment of vascular abnormalities. Currently, the most common uses of RF-based devices are to noninvasively manage and treat skin tightening of lax skin, wrinkle reduction, cellulite improvement, and body-contouring enhancement by influencing adipocytes. There are many devices on the market that have wide-ranging methods of RF delivery.

RF devices may be monopolar, meaning the patient is grounded and the RF is delivered through the skin, into the body, and ultimately to the grounding electrode. Typically, RF travels through structures with the highest water content with the greatest resistance of fat. 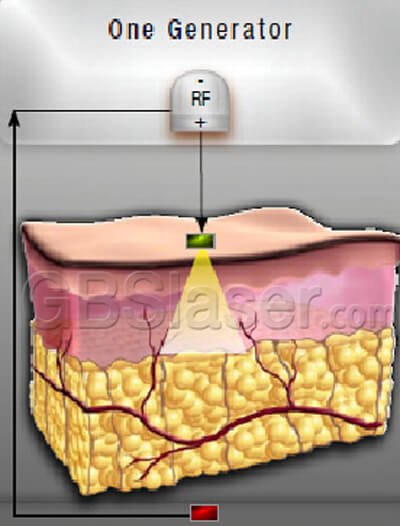 These monopolar devices may be delivered in a stamped mode in which a short cycle of 1-2 seconds is delivered while the handpiece is held in place (Thermage Solta Medical, Hay-ward, CA). Alternatively, monopolar RF may be delivered by either continuous movement or dynamically, where RF is delivered in a continuous pulse with constant rotation of the handpiece (Exilis, BTL, Prague, Czech Republic). In the static stamped method, a single pulse is delivered; the handpiece is then moved to an adjacent marked area and fired again. This is performed for hundreds of pulses until a premarked area is treated. Each pulse is measured for temperature while spray cooling is applied so the skin temperature does not exceed 45°C. With dynamic monopolar RF, the handpiece is continuously moved, and specific areas of laxity can be targeted in a relatively short time to reach a final temperature. The surface temperature measurements are continuously monitored, and the measurement tool is often built into the handpiece. The dynamic devices are quicker and require more technique and skill; the stamped devices are more tedious and take longer, but are easier to perform.

When using the bipolar method of RF delivery, the RF travels to and from the positive and negative poles, which are usually built into the handpiece. With a specific distance between the electrodes, the depth of penetration and heating is predetermined by the spacing of the electrodes and typically confined to within 1-4 mm of the skin surface. It is commonly stated that the depth of penetration is half the distance between the electrodes, but there is little evidence to support this assertion. 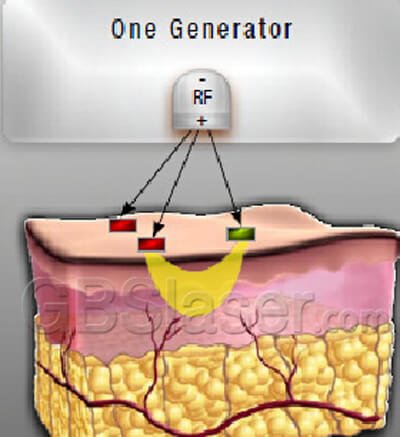 Another form of delivery is unipolar, in which there is one electrode, no grounding pad, and a large field of RF emitted in an omnidirectional field around a single electrode. This is analogous to a radio tower broadcasting signals in all directions. Some devices new to the market are now labeled to be tripolar or multipolar but are variations of the 3 basic delivery methods (ie, monopolar, bipolar, and unipolar). Other energy sources (eg, laser or IPL) can be combined with RF. Large arrays of technologies use RF to smooth and tighten skin and reduce fat. Each of these devices have unique names and marketing associated with them, but there are individual advantages and disadvantages. The most common uses of RF-based devices are to noninvasively manage and treat skin tightening of lax skin, including sagging jowls, abdomen, thighs, and arms, as well as wrinkle reduction, cellulite improvement, and body contouring.

The most widely used combination RF systems are those that use IPL, a diode laser, or infrared light. One system (Aurora SR, Syneron Medical, Ltd, Yokneam, Israel) uses IPL as its optical energy source, with wavelengths between 400 and 980, 580 and 980, and 680 and 980 for different targets or chromophores. RF energies up to 25 J/cm3 can be generated with, dermal penetration of 4 mm.19 Another system (Polaris WR, Syneron Medical, Ltd) is a combined 900-nm diode laser with RF energy. Optical and RF energies are delivered simultaneously through the bipolar electrode tip. Optical energy fluences range from 10 to 50 J/cm2 and RF energies from 10 to 100 J/cm3. Another ELOS device (VelaSmooth, Syn- eron Medical, Ltd) uses a combination of infrared light (700- 2000 nm), RF energy, and suction with mechanical massage for the treatment of cellulite. All devices have been reported to lead to moderate improvement. 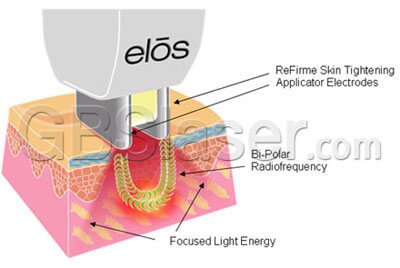 The Aluma RF plus vacuum device (Aluma System Lumenis, Inc, Santa Clara, CA) is composed of an RF generator, a handpiece, and a tip with 2 parallel electrodes. When the handpiece with the tip is placed perpendicular to the surface of the skin, the system produces a vacuum, which suctions a small area of skin. The skin becomes a U-shaped area with epidermis on both, sides and derails and connective tissue in the middle. The design is to allow the energy emitted to reach the middle and deep dermis. When 46 patients with 8 facial treat¬ments, every 1-2 weeks, were evaluated, statistically significant improvement in facial wrinkles was observed. A low incidence of adverse events such as burning and crusting was reported. Another study reported clinical improvement in 30 patients treated with 6-8 cycles of the vacuum plus RF system. Patients were treated for multiple clinical conditions, including periocu¬lar and glabellar wrinkles, striae distensae, and acne scars. By histology, there was less collagen atrophy and greater interstitial edema of treated skin compared with untreated skin, which showed atrophic dermal collagen with elastotic changes. 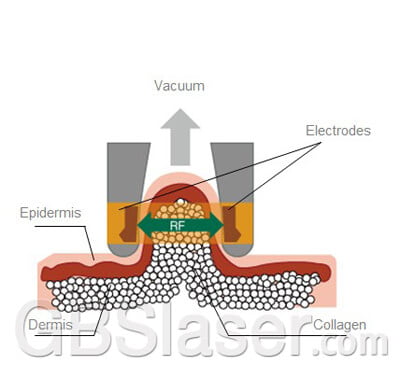 Fractional RF is another form of bipolar RF delivery with mini-electrodes. The concept is that RF is omnidirectional so that dots of RF spread out from the point of contact in comparison with laser, in which the energy is attenuated in a sharp fashion in interaction with tissue. Fractional RF has been used mainly for skin rejuvenation. Less than 1-mm thermal injuries are formed in a patterned fractional array directly to the reticular dermis. The area directly in contact with and below the array of microneedles or electrodes is selectively heated, whereas the areas between the targeted areas are left intact. A prospective multicenter study was conducted on 35 subjects who received 3 treatments on their entire face with a fractional device (eMatrix RJF, Syneron/ Candela Medical, Ltd).24 Clinical improvement was assessed 4 weeks after the last treatment using photographic analysis. Eighty-three percent of patients showed improvement in skin brightness. 87% in skin tightness, and 90% in smoothness and wrinkling. Subjects undergoing facial treatment had minimal pain, no permanent side effects, and no significant downtime. Investigators’ assessment for improvement in skin texture correlated with subjects* evaluation and was >40% for approximately 50% of subjects. Eighty percent of the subjects were satisfied with the results. Higher energy levels and lower coverage rates produced better esthetic results along with less pain. 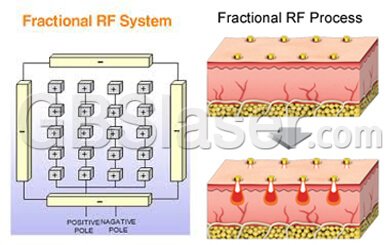 Precisely controlled Bi-polar RF energy will be delivered into a certain depth of dermis through a minimally invasive gold-coated mirco-needles in order to induce dermal coagulation.
Micro Needle penetration length can be adjusted from 0.5 to 3mm depth selectively considering the target areas depending on symptoms.

Share this post
FacebookTwitterGoogle+PinterestLinkedIn
Related posts
Changes in the Skin
May 29, 2015
Advanced Fractional Micro-needle RF technology
May 6, 2015
Request a Quote
Why choose us
Purchase&Shipment