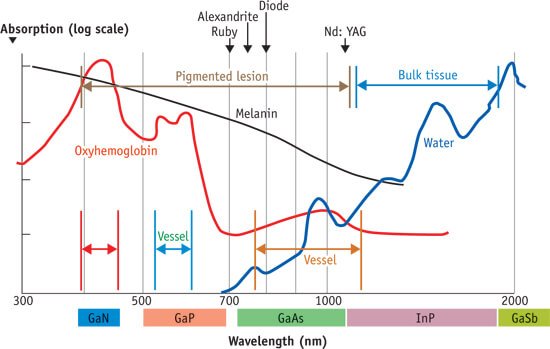 Melanin absorbs across a wide spectrum of wave-lengths. Eumelanin, the primary chromophore in the epi-dermis and darkly pigmented hair follicles, has a broad absorption spectrum spanning from ultraviolet light to the near-infrared region. Eumelanin is the chromophore targeted in lentigo simplex. It is also the target in laser hair removal with the secondary target being the follicular stem cells, as reported by Grossman and colleagues in 1996. In fair-skinned individuals with dark hair, wave-lengths in the near-infrared range (810 nm diode; 755 nm alexandrite) are ideal for laser depilation. However, a common mistake is to use these popular devices for hair removal of red or blond hair, which is primarily composed of pheomelanin. These laser wavelengths are poorly absorbed by pheomelanin and are therefore ineffective for permanent removal of red or blond hair.

In general, water is not a useful target for selective photothermolyis because it is present at high concentration in almost every skin structure. Water absorption gradually increases starting in the near IR range and peaking within the mid-IR spectrum. When used in conjunction with appropriate epidermal cooling devices, lasers within this wavelength spectrum can function as non-ablative modalities for photorejuvenation by targeting water within the dermis, thereby generating heat and controlled thermal damage. This wounding of the dermis subsequently results in collagen remodeling, as well as neocollagenesis, contributing to the modest improvement in the appearance of rhytides.

More recently, near-infrared lasers have been used by Sakamoto and co-workers and by Anderson et al to target lipid-rich tissue. Unlike the targeting of traditional chromophores, which is based on electronic charge, lasers to target lipids are based on the vibrational modes of the molecules. Lipid molecules are selectively destroyed at 1210 nm and 1720 nm where their absorption is slightly higher than that of water. Although there are no commercial devices yet available, the application of these forthcoming devices offers an appealing, alternative, non-invasive methodology of targeting lipids.

The second essential factor for SP is to use a pulse duration that allows heat to be confined during the laser pulse in or near the target structures. The moment that heat is formed in a target by preferential absorption of photons, the target begins to cool by conduction. Therefore, heating of the target is a balance between the rate of photon absorption and the rate of cooling. The concept of a particular target’s thermal relaxation time (TRT) is useful in clinical practice to pick the correct pulse duration. TRT is simply defined as the time required for substantial cooling of the target structure. TRT is strongly related to target size, and this variation accounts for the wide range of laser pulse durations needed for optimal dermatological lasers. A simple and useful approximation is that TRT ≈ d2, when TRT is in units of seconds, and d is the target size in millimeters. For example, a 1 mm leg vein cools in about 1 second, while a 0.2 mm telangiecta-sia, typical for rosacea, cools in about 0.04 seconds (40 ms), and a 0.03 mm venule in a child’s port-wine stain cools in about 0.001 seconds (1 ms). The optimal laser or IPL pulse duration is typically about equal to the TRT. In this example, a very long exposure from a low-power KTP (532 nm) laser would be appropriate for treating the leg vein. A higher power KTP or pulsed dye (595 nm) laser operated at about 20–40 ms would be appropriate for the rosacea-associated telangiectasia, and a pulsed dye laser operated at about 1 ms would be appropriate for the pediatric port-wine stain. This extreme dependence of TRT on target size applies all the way down to the nano-scale of subcellular targets. Q-switched lasers are used in dermatology because their 10–100 nanosecond pulse durations are shorter than the TRT for targets such as tattoo ink particles, melanosomes, and drug pigmentation deposits .

For wholesale, distribution, or private label business, please leave your message below. Our sales will respond in 24 hours.

Buy Now
Buy from our official e-Commerce website (iBeautyMachine.com) to get up to 8% discount.Order Online
Why choose us
Purchase&Shipment
error: Content is protected !!